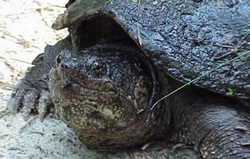 The Common Snapping Turtle is one of the most aquatic freshwater turtles found in the state. However, individuals of all sizes can be found on land, especially nesting females. In the water,  snapping turtles are powerful swimmers, but will frequently walk along the bottom. These turtles rarely bask on logs, but will sometimes bask while floating at the water’s surface.  Snapping turtles can be found in nearly all permanent water bodies, but they prefer water bodies with soft bottoms and abundant aquatic vegetation. Small individuals can be found in streams. Individuals have also been found in brackish water along the coast.  Snapping turtles lay between 11 and 83 round eggs during the late spring and summer. Females may walk a considerable distance from water to lay their eggs, and are frequently hit by motor vehicles while crossing roads.  Snapping turtles get their name from their defensive behavior. Many individuals, especially those taken out of the water, will bite readily with their strong jaws if approached. Snapping turtles are economically important as many are harvested each year for their meat. 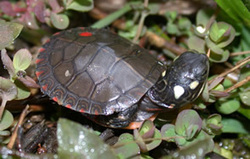 Painted Turtles have a smooth and attractive shell with red, yellow, and/or black patterns which makes this turtle easily distinguished from other species. The top shell is unique due to the large scutes which lay in straight rows across its back.  Males can be differentiated from females by their longer foreclaws, longer tails, and more depressed shells; males are also usually smaller than females. Adults range from 4.5 to 8 inches in top shell length.  The painted turtle is omnivorous. Juveniles are more carnivorous than adults, and feed heavily on aquatic invertebrates. 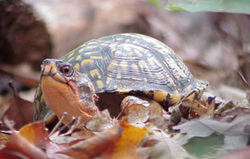 Throughout all three regions, Eastern Box Turtles are small to medium sized, attaining a maximum length of 8 inches and they have a highly domed top shell. The bottom of their shell is hinged. While mud and musk turtles also possess hinged under shells, the box turtles are the only species which can shut their shell completely.  Coloration and amount of pattern are variable, but the top shell is usually brown with a orange or yellow pattern. The Eastern Box Turtle was designated as the official state reptile for North Carolina in 1979.   It  is the only fully terrestrial turtle encountered in North Carolina. Box turtles live in a wide variety of habitats from forested areas to dry grassy meadows to swamps and sandhills.  They will eat almost anything that they can fit in their mouths including worms, insects, fruit and berries, mushrooms among other food items. As they mature their diet shifts from primarily animals towards one that includes more plant material.   Box turtles also possess a homing instinct. If you find a box turtle on the road, do not take it home with you and release it. A box turtle released away from its home range will often wander until it dies. Rather if it is safe, move the box turtle to the side of the road. 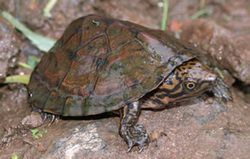 Common Musk turtles can be found all throughout North Carolina in all three regions.  Common Musk Turtles (or also known as stinkpots) have small bottom shells and it has a single hinge that provides little to no protection for their legs, distinguishing them from the similar mud turtles. Musk turtles have two light stripes on their heads.  Their top shell is often smooth and has a ridge down the center. It is usually black in color and sometimes covered with spots or streaks. This species is mostly aquatic and usually not found far from water. They are most often seen walking or swimming along the bottom in shallow water. They are active during both day and night. Musk turtles have been found basking more than 7 feet above the water on tree limbs. This species will frequently bite when first captured and will release a smelly musk, which gives the species its name.  Common Musk Turtles are found in many waterways, but prefer still or slow-moving bodies of water with soft bottoms. This species is intolerant of brackish water and spends the winter buried in the mud.  Common musk turtles are omnivorous and feed on small aquatic and semi-aquatic animals, aquatic plants, and carrion.