There are 5 species of turtles found along the coast of  North Carolina that are in danger of becoming extinct. 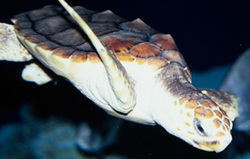 The loggerhead is listed as a threatened species by the U.S. Fish and Wildlife Service and is protected by law.  This species regularly nests along the coast of North Carolina.   Nesting period extends from the middle of May until late August. Clutches, or nests of eggs, have been found to contain between 47 to 220 eggs, with an average of 120 eggs. 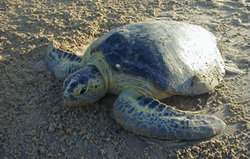 Green turtles are found in the open ocean and estuarine habitats. During summer months they may enter sounds and rivers.  Females nest at night and lay several clutches of approximately 150 eggs.  Green Turtles are strong swimmers and are known to migrate long distances.  Green turtles are omnivorous. Young are primarily carnivorous. Adults are mainly herbivorous, but often eat jellyfish.  This species is considered threatened by the U.S. Fish and Wildlife Service, and is protected under U.S. law. The primary reason for its decline is overhunting. Both its flesh and eggs are eaten. For this reason, it has been termed the world’s most economically important reptile. 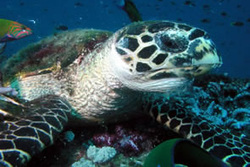 In North Carolina, this species has only been found in the open ocean. In more tropical environments,  it is commonly found around reefs and estuaries.  Once thought to remain in one area for their entire lives, they are now known to migrate long distances.  When females lay their eggs, clutch size varies between 53 and 206 eggs.  Hawksbills are omnivorous. They consume both marine plants and animals, especially invertebrates.  The Hawksbill has very attractive top shell scutes. It is hunted for its shell, which is used to make carved “tortoise shell” items. It is listed as endangered by the U.S. Fish and Wildlife Service and is protected by law. 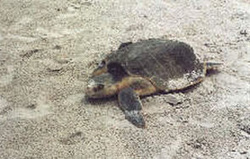 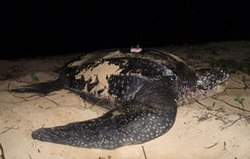 Leatherback TurtlesLeatherback turtles are a federally endangered species protected under the Endangered Species Act. Although numbers of nesting females has increased in recent years on some protected beaches, there is a trend of overall decline. Loss of nesting beaches humans are prime causes of the population decreases in North Carolina and they are rarely found.﻿